This Gothic sideboard is easily taken to pieces and put together again : the pieces are simply fitted together, without fixing. This was a “travel chest”. Marie-Rose Carouy had taken off the locks and fittings to exhibit them in a decorative frame… 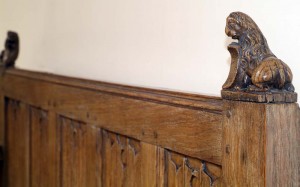 The solid bench-chests would often form the greater part of the furniture in the Middle Ages, being both utilitarian and decorative. As a typical item of furniture in the 15th century, its structure is simple : the chest is used as a seat and is completed by two solid armrests and a straight back. The panels are parchment-like; two small heraldic lions decorate the ends of the back. Experts do not agree on the origin of these small lions, which could have been added. The hospital of Lessines owns fifteen or so of these bench-chests dating back to the 15th, 16th and 17th centuries, so forming a fine collection of its kind. 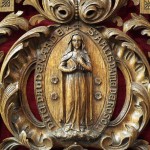 The communion bench (fortunately preserved from the fate that the reform of the Vatican Council II, in the sixties, reserved for such church furniture : consigning it to antique dealers’ storehouses) is a superb example of the baroque style. The patterns of the delicately carved medallions, clasped in an oaken lacework sculpture, represent (from left to right), the hospital seal, Saint Augustine, Saint Eloi, the seal of Alix de Rosoit. The woodwork brings to mind an image of goldsmiths’ ware.

The 3-piece oak cupboard is a fine Louis XV suite assembled on the spot, by a craftsman from Namur, about 1740. Two large cupboards flank a bookcase supported by a low piece of furniture with two-tier drawers.

The prioress’s bookcase is richly lined with works from the 16th to the 19th centuries. At the time, books represented an important asset and a management tool.

They were a source of knowledge, wisdom, method… enlightening and inspiring the hospital management.

Beautiful bindings, fine works from great printers such as Plantin and Moretus in Antwerp. Today, it is a mine of information about the history and the running of the “hôtel-Dieu” through the ages.

The music came from the organ chest placed on the rood loft at the back of the church. The surrounding piece of furniture is quite beautiful, covered with exotic woods with a very fine inlaid work of flowers and birds. It was made by Merlin, a craftsman from Brussels, in 1844.

Sick nuns used to follow the office from the rood loft, so as not to appear before the faithful in that condition. 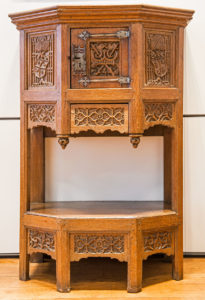 Copyright Francis VaubanThe credence, a piece of furniture intended for eating rooms was created in the 15th century in Italy (the name comes from “credenza”, trust) and was used to taste food, to forestall attempts at poisoning. The furniture was then used to display goldsmiths’ ware.

The hospital is probably the only museum in Belgium to own so many remarkable credences : four Gothic credences from the end of the 15th century and on from the 17th. Their decoration is outstanding : fenestration, roses, Paschal Lambs, fleur-de-lis; two of them probably coming from the legacy of Jeanne Duquesne bear the family emblem of the oak. 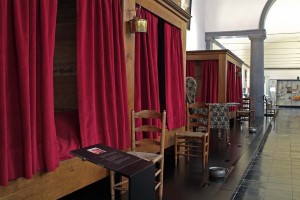 The alcove beds were well suited to the harsh climate of Belgian winters. Since this room was not heated, the bed could be completely closed to retain the heat inside. There was a small room nearby, called the “chauffoir” which was heated by a stove, but only able-bodied patients could go there.

The red colour of the curtains and of the bedspread toned down the sight of bloodstains and meant that the curtains did not have to be washed too often. There were not many know ways of healing in medieval medicine apart from bloodletting, purges, baths and poutices. It was imagined that the body was stricken with substances called “humours” which could become “bad” and vitiate all or part of the individual. Those harmful humours had to be rooted out in order to heal the patient : what better remedy than bloodletting or enemas? 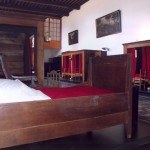 Ten or so beds had to be able to take thirty sick people, or even more. The isolated bed in the middle of the ward – a bastard bed, as it was called – is the forerunner of intensive care : it was occupied by the most ill patient, who required a lot of treatment, continuous supervision and easy and quick access. At the foot of the bed, on a small portable altar, everything needed is ready to administer the sacrament of extreme unction. 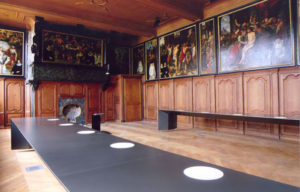 In its current condition, the refectory was reconverted under the priorate of Marguerite of Baudrenghien at the beginning of the 16th century.

The refectory, where nuns had their meals in silence during centuries, while a Sister standing at the lectern would read from the martyrology, is therefore as much a place of contemplation as of earthly nourishment. An outstanding painting, “The Last Supper”, representing Christ’s last supper with his disciples before the Passion, dominates the hall. A prestigious cycle of 14 pictures painted from the 16th century until 1760 creates a complete setting, which represents episodes from the life and especially from the Passion of Christ. A portrait of a civil or religious personality, the donor of the canvas, is to be found in each painting.

The choir stalls are from the Louis XIV period. This harmonious oak ensemble only numbers 18 seats, since the community was limited to that maximum number from the 15th century. They are magnificently carved in the Namur style : shells, lambrequins and lattice decorate each seat. But no “misericords” projecting from the underside of the seats on which the monks or nuns could discreetly support themselves when standing during the service, as were to be found in most stalls.