The hospital library contains approximately 3,000 books dealing primarily with religious subjects: missals, exercises of piety and devotion,…. A small number of works is devoted to philosophy, medicine, pharmacy, etc.. Many binders are original.

The museum has recently acquired several old books on the history of medicine since the Middle Ages. These books were very useful in the development of the new staging of the guided tour. They have provided extensive information and a valuable and varied iconography on the art of healing through the centuries. Some have also been displayed in the windows of the sickward, with appropriate lighting conditions. They are now a great enrichment to the collections of the hospital.

These buckets were used to carry embers for heating the warming pans (long handled instruments which enables the bed to be warmed entirely beforehand) and to perform fumigations to purify the air and expel any miasma floating in the atmosphere.

Some are dated and bear the names of the sisters. 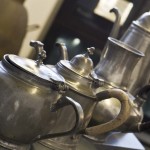 Nearly 750 tin objects were found in the hospital. These are items of crockery (current), medical objects (bleeding dishes, enemas …) or decorative items. Besides the punch of postainier, we very often find on these collectibles a punch of the hospital Notre Dame à la Rose of Lessines.

The hospital had a few fine china services and glass services for wine or liquor. It can certainly include among others: the Tournai china dating from the mid 18th century and first half 19th century. 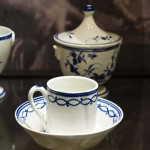 This collection of designs is well known in our regions (“Fly”, the “Laurier”, the “Caterpillar”, the “Acorn”) and often sought after by art lovers today. This porcelain was a huge success in the 18th and 19th centuries, because in making porcelain blue and white (cheaper to manufacture), the Peterinck factory made Tournai china accessible to (almost) all households.