The allegory of religious life 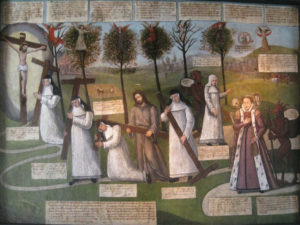 The work is divided into three registers, the first of which (foreground) presents six women : the first one, dressed in plain clothes, is going to take her vows; death and the devil are trying to lead her astray; the second women (with the white veil) is a novice but is surrendering to the temptation of civilian life, she is walking towards a banquet, and the basket of the devil tempting her bears the inscription “ne cella mante” (she will not take the habit of the professed nun). The last four women, who have taken their vows (black veil), follow the narrow winding path that leads to the sacrifice on the cross.

The second cycle illustrates the allegory of six women in the form of trees : the first in the autumn of secular life, the second is losing its leaves, the third is growing green again in spiritual life, the fourth is blossoming, the next one is bearing fruit and the last one is dying, just like the nun who is rejoining Christ in paradise.

Lastly, the third cycle mixes (in the background) the positive and negative symbols of good and evil : three cities, two of which are burning, Babylin, Sodom and Gomorrah, represent immorality and unfaithfulness; ploughmen and sowers evoke the good grain which must germinate or which dies to be. 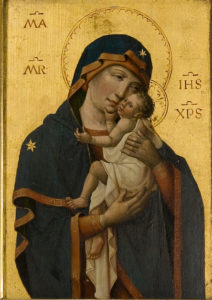 It is one of the rare copies from the 15th century of Notre-Dame de Grâce de Cambrai. A stylistic and dendrochronological study as well as an examination of the pigments has enabled us to situate this work with precision – the central panel is from the 1480s.

In the 15th century, copies were often made; these were small pious tableaux produced in series which became real cult objects. In his copy, the artist was able to preserve the Byzantine character of the work of Cambrai. Note the stiffness of the composition, the folds of the veil of the Virgin and the roll that hides her hair. He was also able to maintain the flavour of the day by giving the icon the characteristics of a Flemish Madonna of the 15th century – a tender and shy Virgin with lowered eyes. The natural rendition of the skin is reminiscent of Flemish primitive painters of the period. The Virgin has a sad and serene look – her son, the infant Jesus who she is holding in her arms, has just revealed the mystery of death and the resurrection.

The painting of the Last Supper (16th century) was offered to the hospital in 1634, by Martin d’Alost and his wife Marguerite Lepoivre, in honour of their two daughters, Jeanne and Jacqueline, nuns at the hospital. The donors were overpainted on the canvas at the time of the donation. 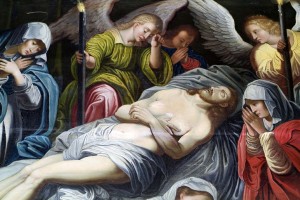 Christ is here painted with a female bosom. This representation of Christ as spiritual father and mother is rare in religious iconography. Many writings make reference to the maternal side of Jesus, which is evident: Christ suffered on the cross to give life and he is the source of celestial nourishment for Christians – and for the members of the religious order also, for sure. The nourishing breast that you see in this tableau is therefore understandable and represents the richness of the mystical life of the members of the religious order of the hospital at that time. Furthermore, in the catholic religion, the Trinity plays a fundamental role. God the father is the transcendence and Jesus, the son, the incarnation. As such, he must also represent both man and woman. In the early days of the Church, major controversies also surrounded the masculine or feminine nature of the Holy Spirit.

Jesus at Simon the Pharisee 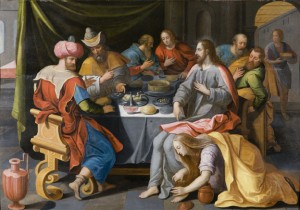 Note the presence of Mary Magdalene, the sinner who cries tears on the feet of Christ before washing them with her long loose hair. It was through her immense humility and sincere repentance that she secured the forgiveness of Christ. Look at the hands of Christ and the eloquent gesture. « Here is the sort of attitude that touches my heart ». Observe this richly decorated table; the rejected items in the background, plunged into gloom while all the light is focused on the carafe of wine and the bread. This scene prefigures the Holy Thursday on which Christ instituted The Eucharist: « Eat; this is my body. Drink; this is my blood ». The bread and the wine symbolise the flesh and the blood of Christ, dead on the cross for the redemption of the human race. 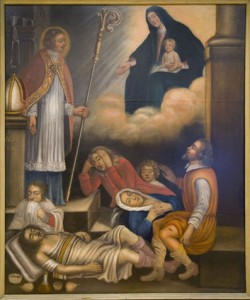 Ex voto dated 1670, probably offered to the hospital by a person saved from the plague. You can see the Saint interceding with Mary on behalf of the plague victims. He was the subject of special worship, connected with the epidemic which struck Lessines and its region in the course of the 17th century.