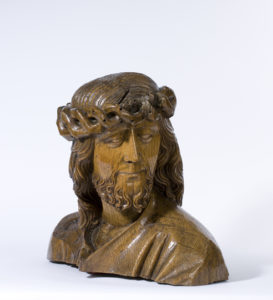 This bust is a remnant of the Christ of compassion of the Saint-Peters church. The bust of the hospital is a piece of sculpture with impressive realism: Christ turnes his head three quarters to the right, eyes wide open and wearing a crown of thorns. The characteristic of this bust is it’s capability to evoke two different feelings: when standing in front of the statue, Christ looks almost smiling, while when looking at his face in profile, he seems troubled.

This bust has probably been mutilated during the French Revolution. 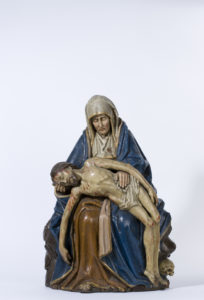 The very compact group of the Virgin and her son is built in a triangle. The Virgin is seated, her face looks overwhelmed but dignified and she is supporting her dead son, lying on her knees. Hisbroken body is resting on her knees, while his arms and legs hang down.

The body is carved and allows a frontal and semi-oblique view. At the foot of the crucified, lays a skull, that of Adam, recalling that Christ died on the cross for the redemption of original sin. An interesting detail: the Virgin is shod with sandals, revealing her bare feet. The group has been repainted in the nineteenth century but still is perfectly readable.

An attractive, polychrome statue of Saint Roch, patron saint of the quarriers of Lessines, who shows his leg sores (a suppurating bubo which appears at the spot where the leg is infected by the plague). 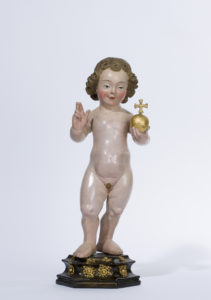 The doll from Malines

The little “doll” from Malines under its cover is an infant Jesus from the 16th century, a typical production from Malines. This infant Jesus, asexual out of a sense of decency, looks like a tiny toy rather than a dignified object of veneration. Perhaps it is representative of a religious and aesthetic trend just like there would be a cult of the pierced Sacred Heart of Jesus at the end of the 19th – beginning of the 20th century?

The features are those of the chubby cherubs and other little angels which also represent cupids, a subject abounding in Renaissance arts. 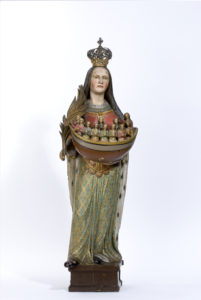 A superb, polychrome statue of Saint Ursula on the sideboard.

In one hand, the palm symbolizing the glory of martyrdom, and in the other, the boat carrying the 11 virgins, her companions who were massacred by the Huns at Cologne, on their way back from their pilgrimage to Rome. The legend grew as time went by, multiplying the number of those martyred virgins who would become eleven thousand.

Ursula was a model for nuns, on account of her exemplary life as an ideal wife of Christ. Her story is to be found in the hospital Saint John in Brugge, where the reliquary of Saint Ursula, a masterpiece by Hans Memling, is one of the jewels of the art of the early Flemish masters.

The religious community instituted by Alix de Rosoit in 1242 was governed by the rule of Saint Augustine. Its flexibility was well suited to the constraints of hospital life, allowing the many tasks and services required of the personnel of a hospital intended for twenty or so sick persons to be fulfilled. For Saint Augustine, charity came first. He had this lapidary maxim : “love thy neighbour, and do whatever you like!”