The humoral theories of Hippocrates and Galen prevailed until the early 18th century, that is until the works of Jean-Baptiste Morgagni and his anatomical conception of disease. The Our Lady with the Rose Hospital has preserved  instruments which are a testimony of the Galen notions where disease was believed to be the result of a disorder,  of a “humoral” imbalance in the patient. These would then contaminate and weaken the body.

Bleeding dish and set of lancets

The bleeding  process consisted of making an incision with a lancet at the artery or vein, usually in the arm, and letting the contaminated blood flow freely.  Considered to be the outmost treatment until the end of the 18th century, it was used to cure both anaemia and syphilis  … and even to get over an indigestion. History has it that Louis XIII underwent  about 50 bleedings a year. 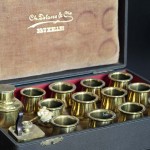 Bleeding was later replaced by the use of leeches and still later by suction cups which when set on the patient’s back was meant to check fevers and cleanse the body.

It was considered important to wash away the “bad” humors from the patient’s body by performing, for example, many rectal injections by way of clysters. This ” do it yourself clyster ” preserved at the Our Lady with the Rose Hospital of Lessines dates back to the 18th century. Around the 17th century, there was a true “clyster mania” of which Molière was its most caustic critic. The clyster (from the Greek ” kluzein” , to wash out) is an injection into the rectum used for matters of hygiene, but also used to treat disorders attributed to a humoral imbalance, including the most contradictory forms, diarrhea and constipation. The composition varied according to instructions: being either emollient, laxative, astringent, as well as analgesic, cleansing or carminative. The “do it yourself clyster” came to be with the coming of more modest times and prudery. Fastened to a sort of stuffed stool, it allowed one to purge oneself without help. Some doctors warned however against its excessive use, being of the opinion that the bowel needed to work on its own. By the end of the 18th century, enemas were once again used for healthier purposes such as a means of introducing medication into the body.